The Sumida River in this area is also called the waterfront, and it is close to Tokyo Station. Many major Japanese companies are located here, including the leading companies in the Tokyo Sumitomo Twin Building and the headquarters of Kirin Brewery.

There are many cherry trees along the Sumida River, and it is very beautiful when the cherry trees are in bloom.
Also, this area is often used for filming for TV and movies, and I have witnessed it several times. （I’m proud of it.) This Nihonbashi sluice gate is usually open, but it closes during high tide to prevent flooding.
There is a traffic light, probably for boats. The first bridge on the Turtle Island River is the Linggan Bridge.

Reigan Bridge is a bridge near Kayabacho Station on the Subway Tozai Line, through which Eidaidori Street runs.
The name Reigan Bridge comes from the fact that this area was called Reigan Island. The Kamejima River (Reigan River), over which the Reigan Bridge is located, crosses Eida-dori Street and enters the Sumida River near 1-chome, Kayabacho, Nihonbashi, Chuo-ku, Tokyo today. In other words, the river that enters the south from the Nihonbashi River is renamed the Kamejima River and leads to Tokyo Bay.

The east bank of Reigan Bridge (Shinkawa 1-2-chome) prospered as a berthing place for large ships (Sengokubune) in the Edo harbor, and it was a place that took care of “downstream sake” carried by barrel boats in terms of distribution, and it still retains its appearance today as “downstream sake wholesale store in Shinkawa. The Nihonbashi Water Gate can be seen beyond the bridge. 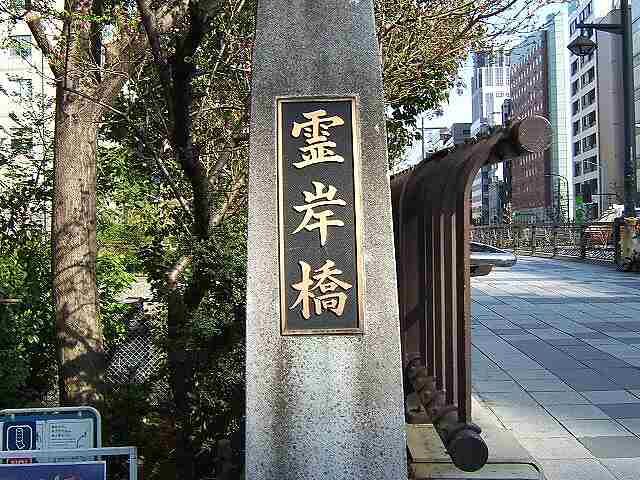 The parent pillar of the Reigan Bridge (Kanji name)

Reigan Bridge is also written as Reigan Bridge.
It has nothing to do with President Reagan of the 40th United States of America (laughs).

The parent pillar of the Reigan Bridge (hiragana name) It was 7:50 on a weekday and the place was crowded with people on their way to work.

Overview of the new Kamejima Bridge This is an overview of the New Kamejima Bridge taken from the upstream Reigan Bridge.

Description of the new Kamejima Bridge The object in the center of Shin Kamejima Bridge Unloading of the cruise ship A cruise ship going up the Okawa River The right is a memorial to the victims of the Great Earthquake. The left is a monument for the war victims.
It seems that the neighbors are making a memorial service, and it is cleaned and there is an offering of flowers no matter what time we pass by.

There is a theory that the name of Kamejima River comes from the name of the town, Kamejima, and that many people who sold bottles lived in the town, and that there was a small island resembling a turtle with a Jizo Bridge built over the moat in the town. However, since the name of this bridge is Turtle Island Bridge and the image of a new turtle shell is inlaid on the parapet, it may be judged that the theory of “a small island resembling a turtle” is more likely.

It is said that the residences of Horibe Yasube, Toshusai Sharaku and Ino Tadataka were located by the bridge of Kamejima River, and there were also the residences of Kano Sukiyoshi, a painter under the imperial command, and other areas commonly called the Daikan Yashiki and Yaba, as well as Ghost Yokomachi. The name Hatchobori comes from a moat (canal) built in the Edo period.
Hacchobori was built in the Kan’ei era (1624-1643) and was called Hacchobori because of its length of eight towns (about 872m).
In the Meiji era (1868-1912), this Hatchobori was also called Sakuragawa or Sakuragawa Canal, but now it is buried and does not exist. On the left side of this building are the ruins of the residence of Horibe Yasube. The parapet of the Turtle Island Bridge is designed in the image of a turtle’s shell. As expected, it is the island of turtles (laugh).
In fact, there are turtles living in this river, and I have seen them many times.

The fourth bridge on the Turtle Island River is Takabashi. There is a ladder at the left end of the Takahashi. I imagine this is for the landing place in front. Is the ship facing here a surveillance ship? I am sorry if it is not.

The surface of the river is calm and you can feel the peace of the nation (laugh).
This Takahashi, as well as Minami Takahashi, is lit up and beautiful at night. It may be the best date course (^^)
I want to cherish this kind of scenery, peace of mind, and peace. It’s a massive-looking Oyabashira.
Please pronounce it muddled “Takabashi” though reading “Takabashi” is also OK.
The thing seen beyond the net is the landing place which I mentioned above.

According to “Etei Ki” written by Ota Doukan in 1457, Takahashi was originally built near the Otemon Gate in the East Gardens of the Imperial Palace, and was moved to the Kamejima River and built in the early to mid Edo period.

I sometimes hear that Takahashi is derived from a high bridge, and it may have been so in the early days when it was made, but there is no such thing now.

Bridge No. 5 on the Turtle Island River is the Minamitakabashi. This Minami-takabashi bridge was built in 1904 and is said to be made of recycled materials from the old Ryogoku Bridge, which was damaged in the Great Kanto Earthquake of 1923. Origin of the South Takahashi Bridge 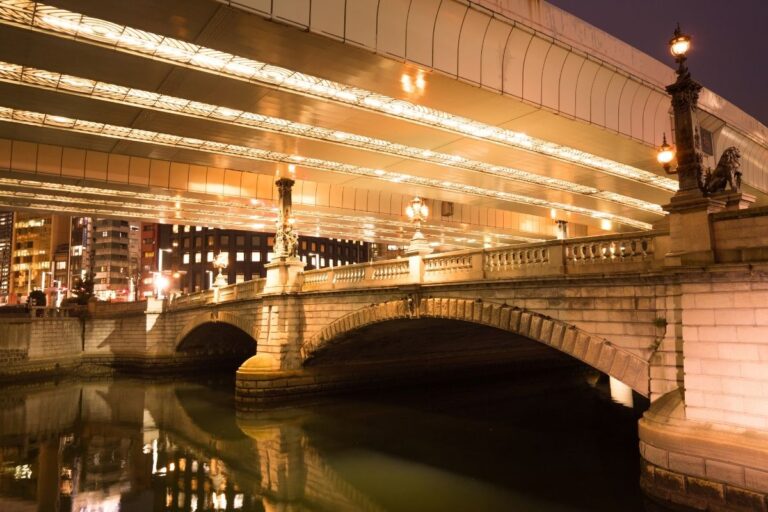 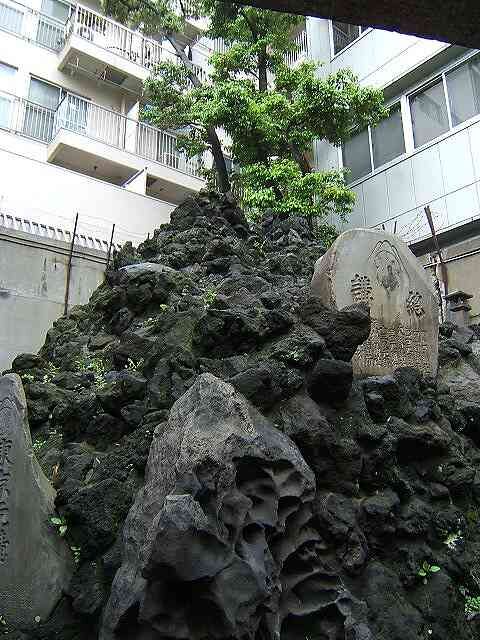 Kamejima River is a relatively short river of about 1.1 km in length that flows through the two corners…