Eitaibashi Bridge was the fourth bridge built on the Sumida River and was completed in August 1698.

Eitaibashi Bridge was built to connect Fukagawa and Nihonbashi bridges using timber from the main hall of Kan-eiji Temple in Ueno. It was built to celebrate the 50th birthday of Tsunayoshi Tokugawa, the fifth shogun of the Edo shogunate. It is said that the bridge was built 100 meters upstream from the present location.
There are two theories about the origin of the name Eitai Bridge.
One is that the area around Saga-cho was called “Eitai-jima” at that time.
The other is that it was built to ensure that the Tokugawa Shogunate would continue in power for many generations to come.

It is said that the Edo Shogunate started to charge a toll when the kitchen situation of the Edo Shogunate became difficult, and it was a toll bridge. On August 19, 1807, the Eitaibashi Bridge could not bear the weight of the many people who came to celebrate the Fukagawa Tomioka Hachiman Shrine Festival, and there was an accident in which the bridge collapsed. 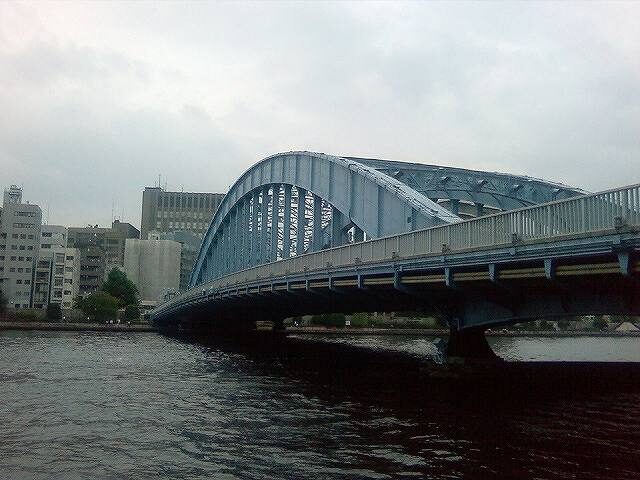 Eitaibashi Bridge seen from Shinkawa side. It is a beautiful design. 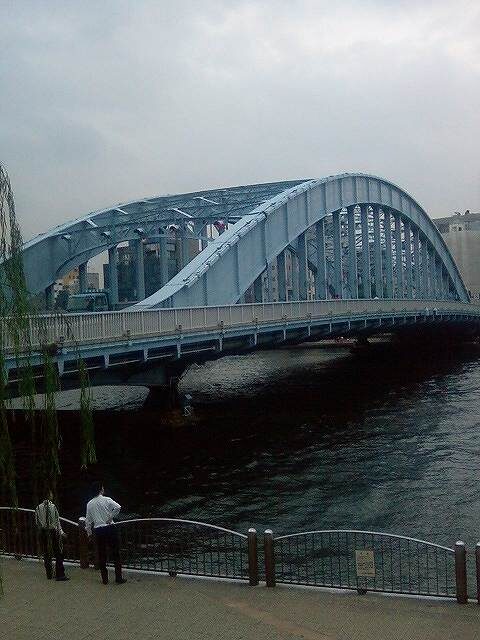 The bridge looks sturdy with a steel frame. It doesn’t seem to be broken even if a lot of people come to the festival of Fukagawa Tomioka Hachiman-gu Shrine. The right is downstream in the direction of Tokyo Bay. 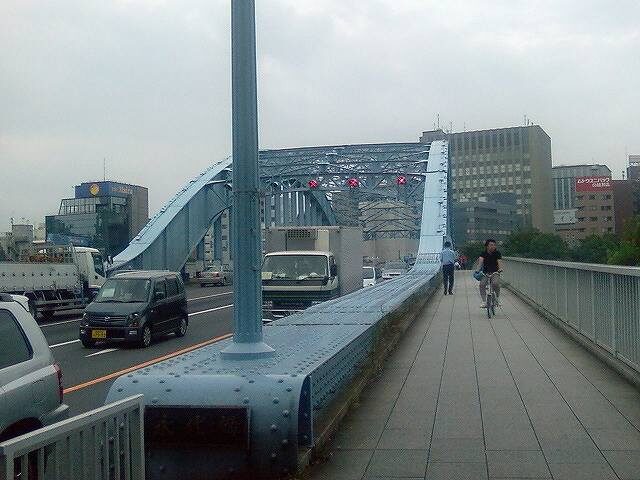 The roadway and sidewalk are completely separated, so you can pass safely. The photo is Eitai-bashi bridge seen from Shinkawa side and right side is downstream direction of Tokyo bay. 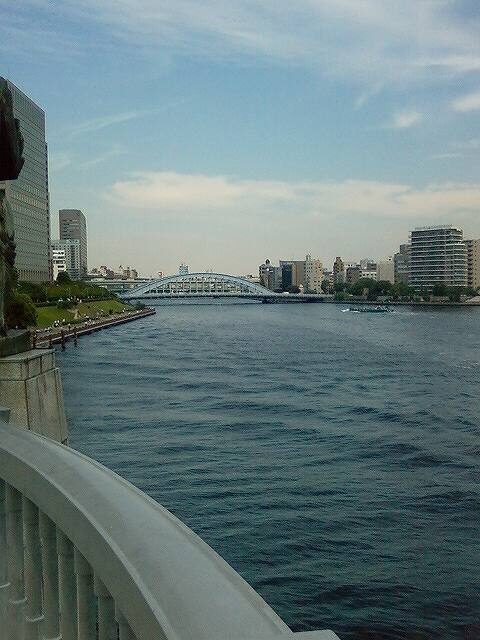 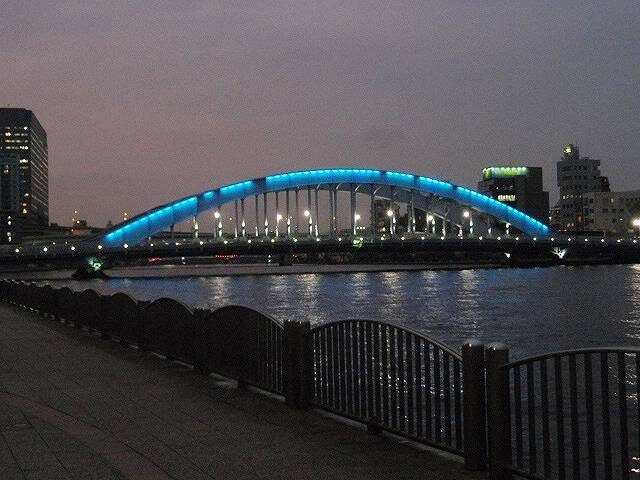 Chuo Ohashi Bridge is a bridge that didn’t exist when fishermen from Settsu, who were called by Tokugawa Ieyasu, moved to Tsukuda Island, and a new bridge was completed in March 1993
Tsukudo-jima is a natural sandbank that was created at the mouth of the Sumida River, and at that time, people used to use ferry boats to get to the island. One of them is the Tsukudo-jima ferry monument.

The Chuo Ohashi Bridge is a cable-stayed bridge with a structure in which cables stretched diagonally from the towers are directly connected to the bridge girders.
When you look at it closely, you will be overwhelmed by the thick wire cables that are stretched in a straight and powerful line.
The bridge girders of the Chuo Bridge were manufactured at the Yokohama factory of Ishikawajima Harima Heavy Industries, which is closely related to Tsukuda Island (Ishikawajima). 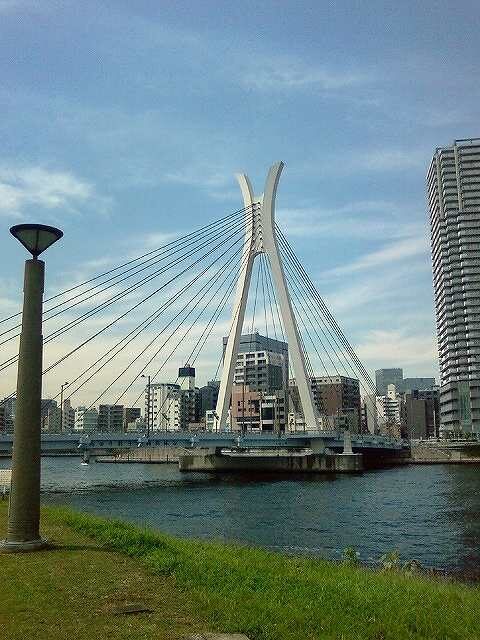 The Chuo Bridge is beautifully illuminated with white mercury lamps and warm cocktail lights from evening until 10pm. 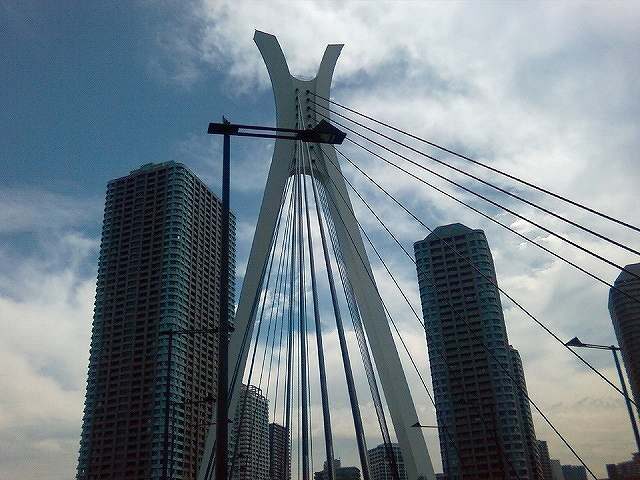 The image of the Central Bridge is a helmet. If you say so, it looks like a horseshoe.
The Sumida River has a friendship river partnership with the Seine River in France, and the Chuo Ohashi Bridge was designed by a French design company. 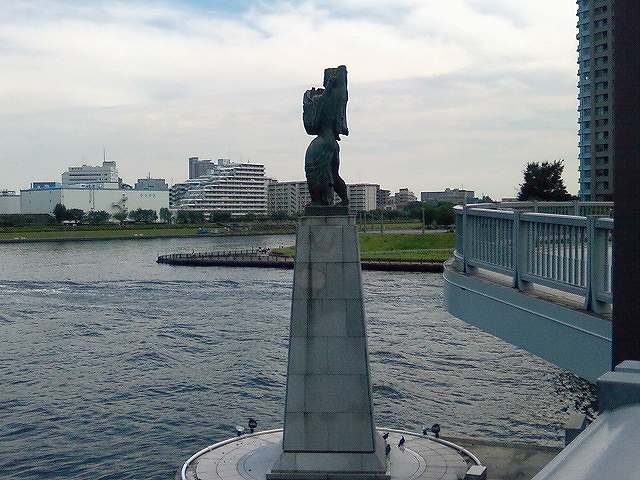 This “Messenger” was presented to Tokyo by Jacques Chirac, then mayor of Paris, as a token of friendship.
The Messenger faces the river, so it is difficult to photograph his face. 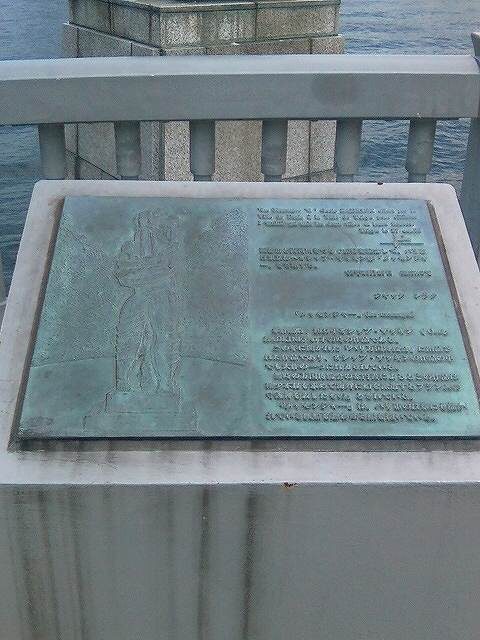 The Messenger was exhibited at the Paris Exposition, and the cast piece was later presented by Jacques Chirac, the mayor of Paris at the time, and installed on the Central Bridge. 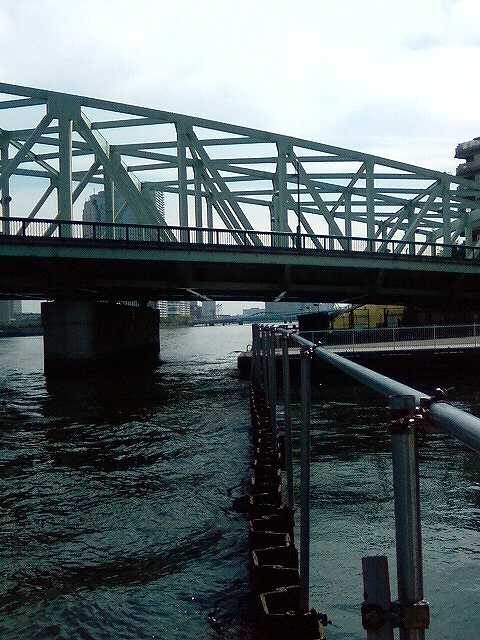 Aioi Bridge is a bridge on Harumi Canal (Sumida River) and Kiyosumi Street. 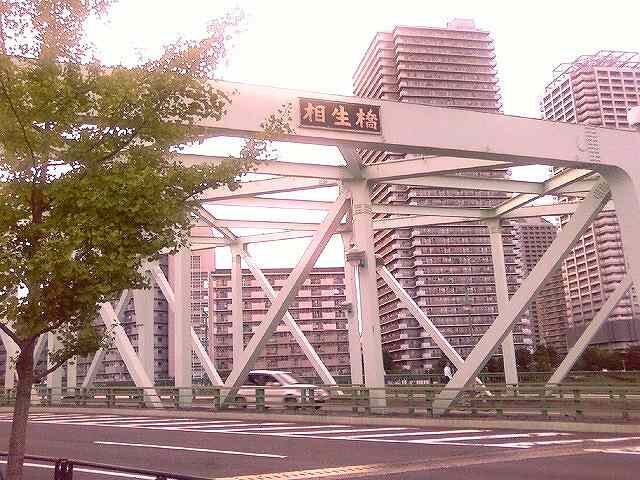 Origin of the name of Aioi Bridge

Aioi means that two or more trees grow out of the same root, and the Aioi pine tree is a pine tree with a black pine and a red pine growing out of one root.
The Aioi Bridge consists of the Aioi Ohashi Bridge and the Aioi Kobashi Bridge across the island in the middle, and it is said that it was named Aioi Bridge because it is Aioi because there are these two bridges.

There is another origin “the bridge relative to Eitaibashi upstream”. This is written on the information board of the Aioi Bridge of the Tokyo Metropolitan Government Bureau of Construction, so it is a strong basis, but I would like to support “Aioi because there are two bridges” rather than “Aioi Bridge” from “relative to Eitaibashi”. Well, it must have been named with various meanings. 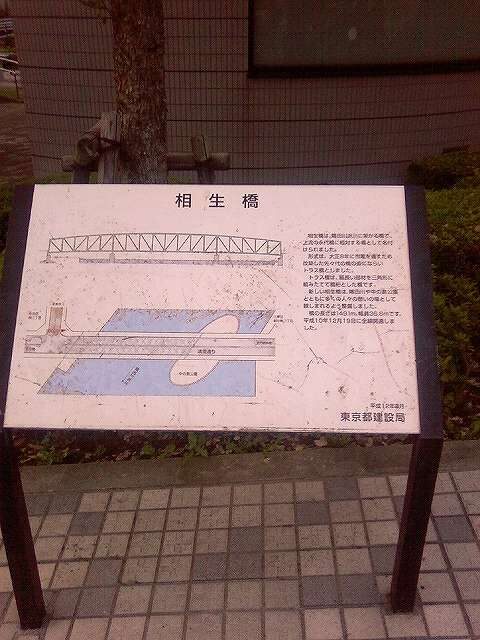 The photo above is the information board of Aioi-bashi bridge.
The west bank (left side) is Tsukuda 2-chome and 3-chome in Chuo-ku, and the east bank (right side) is Etchujima 1-chome and 2-chome in Koto-ku, Tokyo. The white oval is Nakanoshima Park.

Contents of the guide board of Aioi-bashi bridge
Aioi Bridge spans the Sumida River Hawa River and was named as a bridge relative to the Eitai Bridge upstream.
The form of the bridge is a truss bridge, following the form of the previous bridge which was reconstructed in 1919 to carry streetcars.
A truss bridge is a bridge with bridge girders made of long, thin members assembled in a triangular shape.
The new Aioi Bridge is designed to be a place of recreation and relaxation for many people, along with the Sumida River and Nakanoshima Park.
The bridge is 149.1 m long and 36.8 m wide.
The bridge was opened to traffic on December 1 and 9, 1998. The bridge was opened to traffic on December 1, 1998. 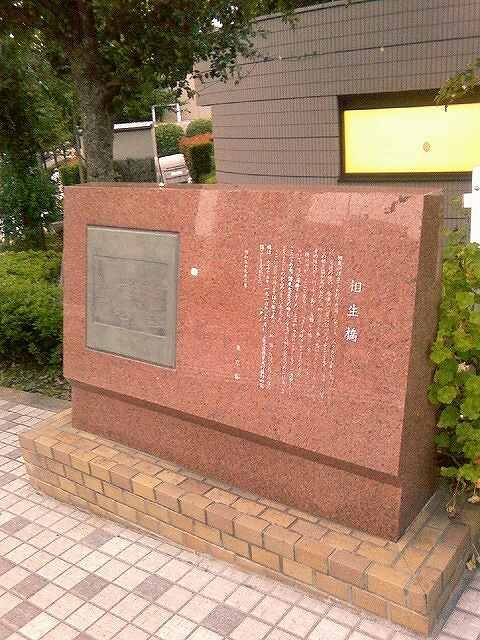 When Tsukudukushima was reclaimed and turned into Tsukishima, it became a town where people lived, and transportation and water supply became necessary.
The Aioi Bridge was built between Tsukushima and Fukagawa. This was in 1903.
Later, the bridge was repaired and divided into two bridges at Nakanoshima Island. The Sumida River bends at the left side of the bridge, where the river branches off to the left and right, and the water from the upper reaches of the river is held there. At the time of the Great Kanto Earthquake and after the air raids of the World War II, various things were gathered here like a mountain.
In addition, because the bridge was a wooden bridge until the time of the earthquake, the fire spread to the bridge as well. The present bridge was completed in November 1926 as the first bridge The present bridge was completed in November 1926 as the first bridge for the earthquake reconstruction project. 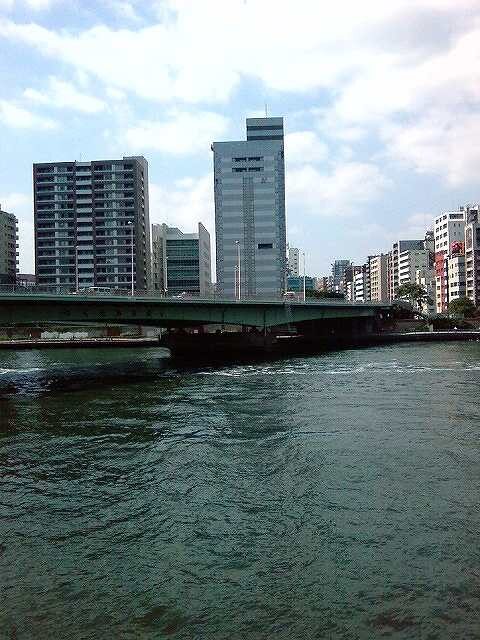 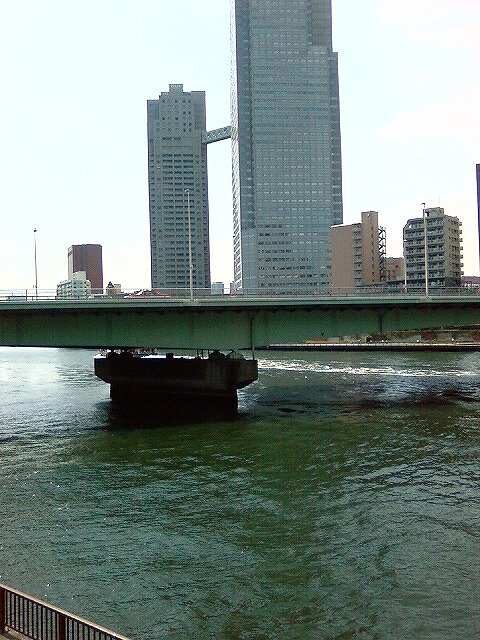 Construction of the Tsukuda Bridge began in December 1961 and was completed on August 27, 1964. 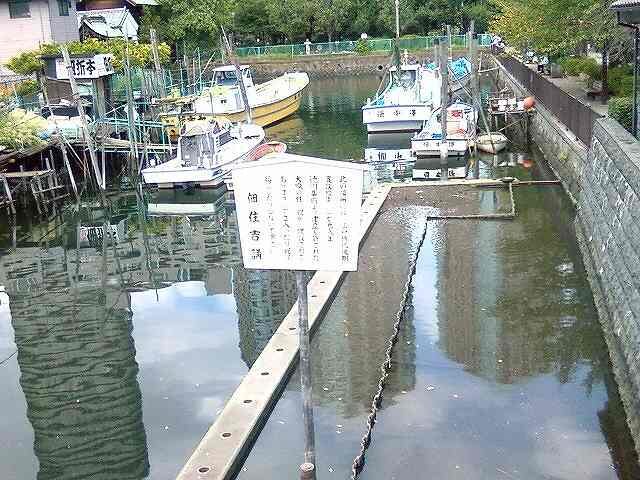 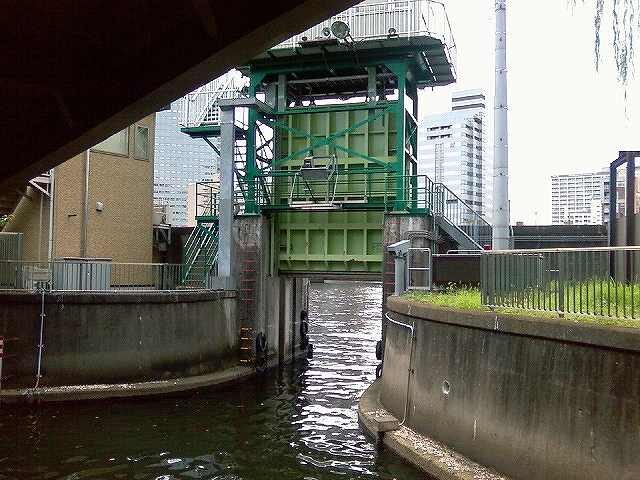 Sumiyoshi Sluice Gate is a sluice gate between the Sumida River and a branch of the Tsukuda River. 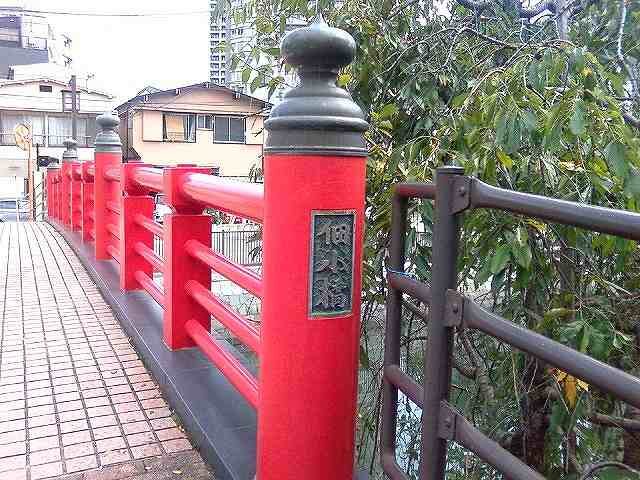 Sumiyoshi Kobashi Bridge spans a branch of the Tsukuda River.
The sphere on the red main pillar is called giboshu (擬宝珠), which is an ornament attached to the parapet of bridges, temples and shrines.
Giboshu is also called “Negidai (green onion stand)” because it looks like a green onion flower. 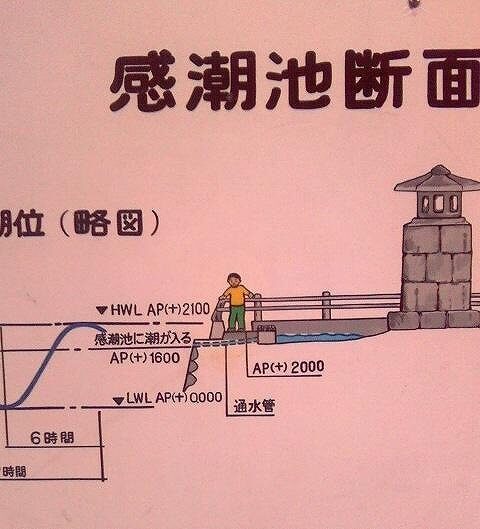 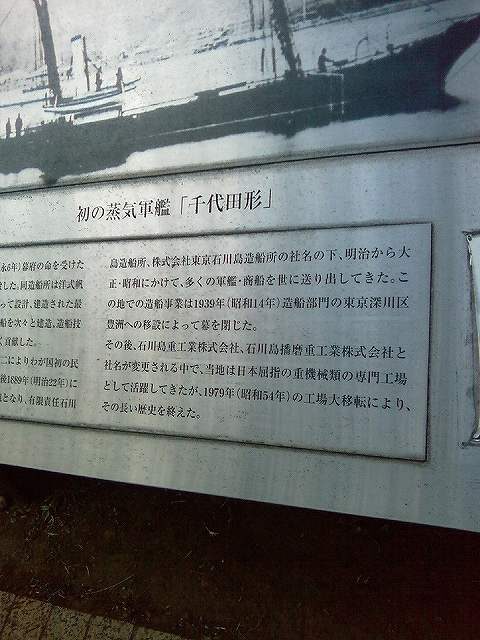 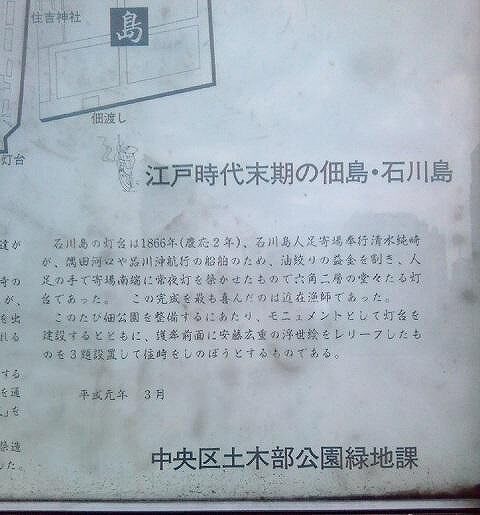 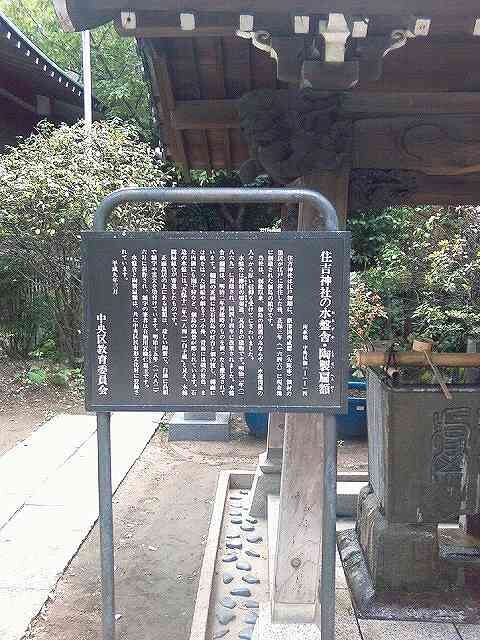